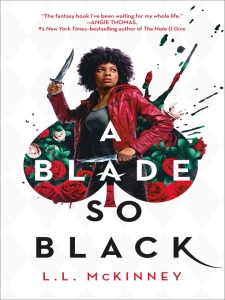 The first time the Nightmares came, it nearly cost Alice her life. Now she’s trained to battle monstrous creatures in the dark dream realm known as Wonderland with magic weapons and hardcore fighting skills. Yet even warriors have a curfew.

Life in real-world Atlanta isn’t always so simple, as Alice juggles an overprotective mom, a high-maintenance best friend, and a slipping GPA. Keeping the Nightmares at bay is turning into a full-time job. But when Alice’s handsome and mysterious mentor is poisoned, she has to find the antidote by venturing deeper into Wonderland than she’s ever gone before. And she’ll need to use everything she’s learned in both worlds to keep from losing her head . . . literally. — Goodreads

I’ve seen A Blade So Black described as Buffy meets Alice in Wonderland and that’s exactly what you’re signing up for. Our Alice is a black bisexual badass. I loved her a lot. She isn’t afraid to mouth off to anyone, even royalty, except her mom. She is fierce but vulnerable, and she finds strength in overcoming her fears. Her narrative voice is casual, even conversational at times, and very engaging. My only criticism is that it sometimes veered into purple prose territory (no normal person describes eyes as “ice-blue orbs”).

I also disliked the unnecessary friendship drama, though that was resolved beautifully, or the love triangle. But other than these minor points, A Blade So Black is very enjoyable, and I’m eagerly awaiting the sequel coming out in September!

CONTENT NOTES: parental death, some things that might be triggering to child abuse victims (e.g. Alice’s mom taking Alice’s bedroom door off its hinges as punishment), police brutality and off-screen murder of a black girl 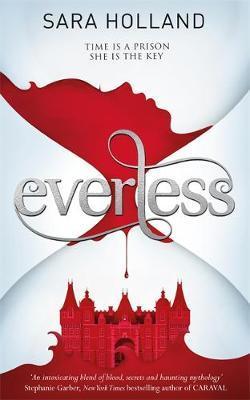 In the kingdom of Sempera, time is currency—extracted from blood, bound to iron, and consumed to add time to one’s own lifespan. The rich aristocracy, like the Gerlings, tax the poor to the hilt, extending their own lives by centuries.

No one resents the Gerlings more than Jules Ember. A decade ago, she and her father were servants at Everless, the Gerlings’ palatial estate, until a fateful accident forced them to flee in the dead of night. When Jules discovers that her father is dying, she knows that she must return to Everless to earn more time for him before she loses him forever.

But going back to Everless brings more danger—and temptation—than Jules could have ever imagined. Soon she’s caught in a tangle of violent secrets and finds her heart torn between two people she thought she’d never see again. Her decisions have the power to change her fate—and the fate of time itself. — Goodreads

I originally read Everless at the beginning of last year and gave it four stars. I was planning to reread it ahead of reading the sequel, but it’s not holding my attention. I have become more judicious in assigning star ratings, and I think I should probably have given this three stars to begin with. It would probably be enjoyable enough, but I have so many other amazing books to read that I don’t want to waste my time on books that are just okay. (Most of the time, at least.)

Have you read either of these books? What did you think? Let’s chat in the comments below!